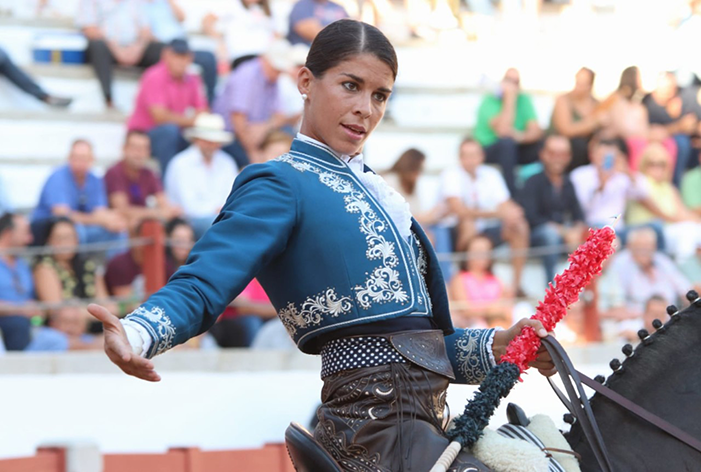 For the first time at the age of 4 Lea get her foot in the stirrup. Twenty five years later shepenetrates the “rejoneo” world, bringing a personal touch to this beautiful equestrian art. Lea was born in a family of riders, in Nîmes (South of France) at the gates of Camargue in a region where horses and bull fighting traditions are omnipresent and she grew up surrounded by horses, bulls and “gardians”.

On the back of her Camargue horse she took part in dressage and training competitions where she won a lot of trophies. Her horse riding instructor quickly realized how gifted she is: “She instinctively knows. She “breathes” the horse.”

Her efforts, sense of observation, intuitiveness and her immense sensitivity incite Lea to push out her boundaries and develop a genuine skill in the dressage art. A series of meetings bring her closer to the “toro bravo” world and the horse riding “torera”. One of them particularly has been a decisive turning point in Lea’s fate: the Lord of the art, the centaur, the Marisma poet: D. Angel Peralta.

The maestro’s years of experiences and triumphs allowed him to detect early the talent of the young French rider. He then offers her, spontaneously, to come in his structures and join his horse trainers’ team in the ranch “El Rocio” in “La Puebla del Río” (near Seville) where his “toros bravo” and “cartujanos” horses graze.

Don Angel Peralta, the forerunner, the renovator of the actual “rejoneo” believes in Lea and makes her one of his disciples and the spiritual heir of this art that he developed and refined over decades with a great talent, passion and hard work!

Her biologist diploma in the bag, Lea became Andalusian. And it’s under the critical but well-meaning eye of her mentor that during four years the young French, riding 10 hours a day, trained her own horses, perfected her bullfighting, developed her own style and personality being in contact with cows and bulls, all this while training in parallel the horses of the brothers Peralta’s breeding.

With four years of sacrifices and hard work, at last, in October 2010 she had thelong awaited reward of the emotions of being introduced to the public.

Dices are rolled and Lea Vicens officially becomes a “rejoneadora” (bullfighter on a horse). After a first season of adaptation period, she accomplished avery promising 2012 season (27 corridas, 60 ears and 10 tails) and was unanimously applauded by professionals and specialized press whom noticed and were never tired of praising her horse-riding and bullfighting style and the elegance of the young French girl.

This website uses cookies to improve your experience while you navigate through the website. Out of these cookies, the cookies that are categorized as necessary are stored on your browser as they are essential for the working of basic functionalities of the website. We also use third-party cookies that help us analyze and understand how you use this website. These cookies will be stored in your browser only with your consent. You also have the option to opt-out of these cookies. But opting out of some of these cookies may have an effect on your browsing experience.
Necessary Siempre activado
Necessary cookies are absolutely essential for the website to function properly. This category only includes cookies that ensures basic functionalities and security features of the website. These cookies do not store any personal information.
Non-necessary
Any cookies that may not be particularly necessary for the website to function and is used specifically to collect user personal data via analytics, ads, other embedded contents are termed as non-necessary cookies. It is mandatory to procure user consent prior to running these cookies on your website.
GUARDAR Y ACEPTAR