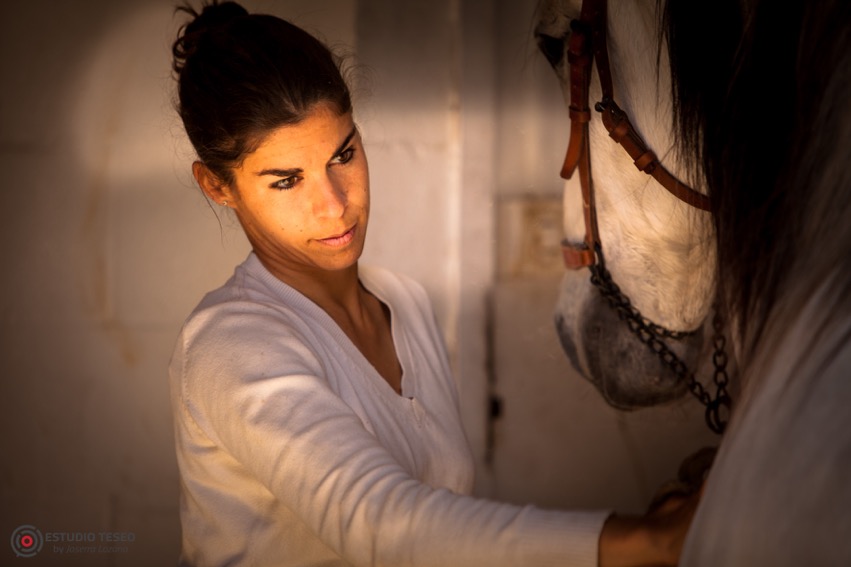 Lea grew up among horses. For her 4th birthday Lea’s parents offered her her first pony named “Ourasi”. Thereafter it is with Camargue horses that she learned all the dressage’s secrets and the mechanisms of working with livestock. Soon after arriving in Spain in 2007 Lea purchased from the maestros Don Angel and Rafael Peralta her first foals. This is how “Gacela” and “Bético” appeared in her stable. Come after them “Desafio”, a foal from the breeding Arsenio Cordeiro, offered by her friend Fermin Diaz, and “Samuraï”, from the breeding Ortigão Costa. Follow “Indio”, “Ardilla”, “Jazmín”, “Caramelo”, “Diluvio” et “Imperioso”. Each and every one of these horses being trained only by her, in the purpose of bringing them in the arenas. Today and thanks’ to her hard work, the young French girl possesses a stable of ten horses trained for bullfighting and four foals still in training. Lea continues to train individually each mount, forging close ties with all of them and cultivating their own qualities. Her goal: to train her foals at her taste, with a permanent concern for accuracy and aesthetics, so they can be artistic horses in a bullfight always moving.

This website uses cookies to improve your experience while you navigate through the website. Out of these cookies, the cookies that are categorized as necessary are stored on your browser as they are essential for the working of basic functionalities of the website. We also use third-party cookies that help us analyze and understand how you use this website. These cookies will be stored in your browser only with your consent. You also have the option to opt-out of these cookies. But opting out of some of these cookies may have an effect on your browsing experience.
Necessary Siempre activado
Necessary cookies are absolutely essential for the website to function properly. This category only includes cookies that ensures basic functionalities and security features of the website. These cookies do not store any personal information.
Non-necessary
Any cookies that may not be particularly necessary for the website to function and is used specifically to collect user personal data via analytics, ads, other embedded contents are termed as non-necessary cookies. It is mandatory to procure user consent prior to running these cookies on your website.
GUARDAR Y ACEPTAR